The Japanese Buddhist Pantheon contains over 3000 Buddhas,
Bodhisattvas, other dieties like tenbus and guardians and some eminent
Buddhist masters considered to have attained Buddhahood.  We
will summarize here the different categories of this Pantheon,
according to the Japanese tradition, especially the Shingon school.

The structure is composed of different categories of beings,
organized according to their role in the Buddhist cosmology.
They are:

I invite you to visit this site to find some great Buddhist pictures you can use for art or tattoos. 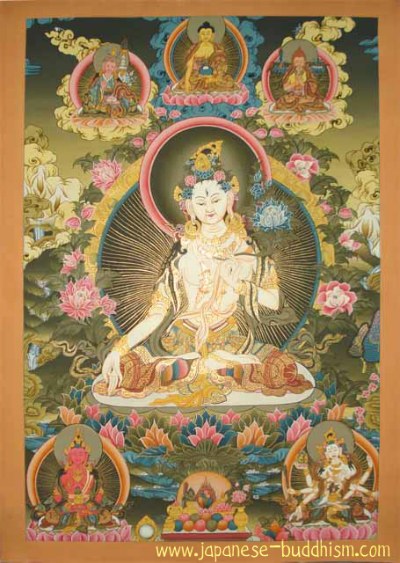 There is a multitude of Buddhas but there are 5 principal ones that you
can see in this picture:  (click for details on
that Buddha) 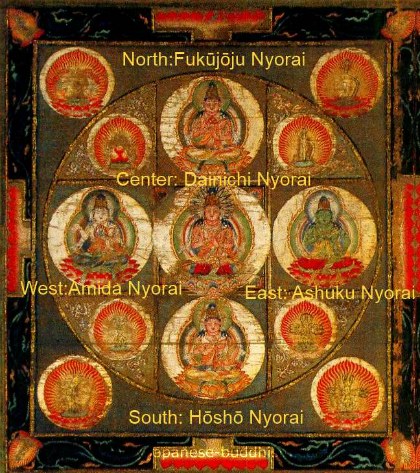 Buddhas were human beings who transcended death, rebirth and
suffering through their own enlightement.  Buddhas are
considered immortal and have great psychic powers.  They were,
though, simple humans before attaining nirvana.  They cannot
be compared to Gods in the sense that they did not create the universe
and do not rule over it, like other Gods of the different religions. They were born humans, like us.

They are guides to show us the way to enlightement and grant wishes to
the worshippers, thanks to their psychic powers.  They also
live in many worlds at the same time.

Some Of The Important Buddhas Include:

A Bodhisattva is a being (human or otherwise) who delays its
attainment of Buddhahood in order to help other biengs attain theirs.
The easiest way to describe this is through a story taken
from Pollock, Neal (2005). Practices
Supporting Dzogchen: The Great Perfection of Tibetan Buddhism
: 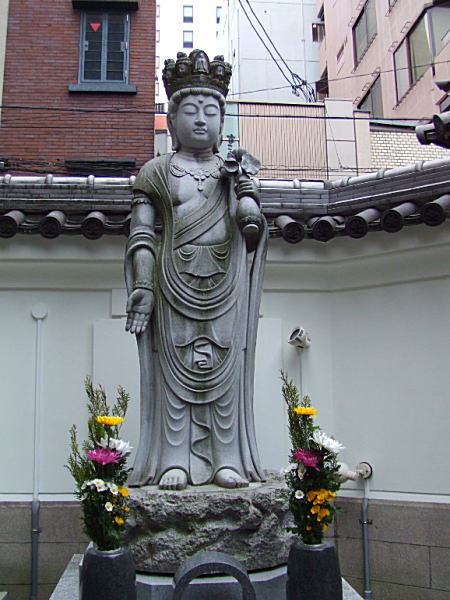 Some of the most important Bosatsu in Japan

Wisdom kings or Myō-ō 明, in Japan,  are scary
looking deities, weilding weapons, who represent the power of
Buddhism to overcome the passions.  Introduced to Japan in the
9th century by Japan’s Shingon and Tendai sects of Esoteric Buddhism
they were originally Hindu deities who were later adopted into the
Buddhist pantheon to fight cravings.

Tenbus are a mixed group consisting of celestial Beings, Gods, Deities,
Hindu demi-gods (DEVA) adopted into Buddhism.  Their role is
to protect Buddhist Law.  This group is very diverse and
contains many type of beings like dragons, nymphs, Karura, and
monsters. This category is one of the reasons why Buddhism co-exists so
well with other religions, they incorporate the Gods of other religions
in the Buddhist pantheon.

This category is marked by the kami integrated from the Shinto religion
to Buddhism.  In its long history, Buddhism adopted gods from
other religion and accepted them as manifestations of heaven
used to guide sentient beings to the Dharma.   Today, it is
not uncommon to see temples and Shrines in the same coumpound, existing
in harmony and followers worshiping both kami and Buddhas.

Some notable Gods in this category:

Some past masters of Buddhism, mostly abbots and founders of certain
schools are considered to be either bosatsus or Buddhas.
Their life was dedicated to Buddhism and they marked the religion by
their contribution.  They are the equivalent of the saints in
the Christian faith.

Some notable masters are: