Nichiren is one of the most influencial and controversial Buddhist monk of Japanese history. The school he founded, the eponymous Nichiren School, flourishes even today in Japan and also spread around the world. He was very strict and didn’t accept any compromises, thus diclaiming what wasn’t his, wrong.

Born March 30 1222 in Kominato, southern Chiba prefecture, Zennichimaro as he was named at his birth, is believed to be from a family of fishermen. He started studying Tendai Buddhism at Kiyosumi-dera when he was 11 and was formally ordained 4 years later. He took the Buddhist name Zeshō-bō Renchō.

From 1233 he started his quest for the true Buddhist doctrine. This quest brought him to all the major Buddhist centers of Japan, Kamakura, Kyoto, Hiei-zan, Nara and Koya-san.

During these years, he studied the Amidism (Pure Land schools), Tendai, Shingon and Ritsu sects. He didn’t find anything in these sects that he could call the true essence of Buddhism. In 1253, he became convinced that the real essence of Buddhism is in the Lotus Sutra.

In this sutra, the Buddha says that after his death, the age of degenertion (Mappô) would come and out of this darkness, a teacher would come forth and preach the true doctrine. Nichiren felt he had to be this teacher.

In an act of courage, or defiance, he returned to his old monastery of Kiyosumi-dera and declared to his old teachers that he had found the real faith and that all other forms of Buddhism had to be banned from Japan or some great calamities would befall the country.
Around this time, he changed his name to Nichiren, coming from the two characters 日(sun) and 蓮 (lotus).

His declaration to the temple was not well recieved and he had to leave. He went to the administrative capital of Kamakura where he started teaching his new doctrine of Namu Myoho Renge Kyo as the essential mantra to achieve enlightment. 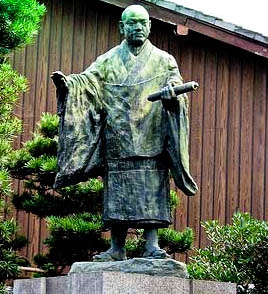 As he gained followers from all classes of society, he started criticizing other schools saying that they were trying to control the masses with complicated rituals and a patronage system. Acoording to him, their ultimate goal was political and religious control of the people, not the respect of the Dharma.

The only correct form of Buddhism, according to him, is regarding  the Lotus Sutra as the ultimate Buddhist text and practicing its teachings as he taught it. This, not surprisingly attracted him a bit of trouble from the power in place and he had to often move as he was harrassed. In 1264, he barely escaped alive from an ambush in the Awa province.

Far from detering him, he continued propagating his doctrine in the Kanto area. After an altercation with a famous and infuential priest, Ryōkan, Nichiren was summoned in front of the authorities. He did another sermon about the corruption of other sects and the role of the goverment in supporting them.

Suffice to say that the sermon was not to the taste of Hei no Saemon, the powerful police officer who summoned him. He was then abducted and they wanted to behead him but a bright astronomical phenomenon then appearing scared them.

According to some, Nichiren then discarded his pretense of being a mortal priest and exhibited his true identity: either the reincarnation of the Boddhisattva  Jôgyô or the true Buddha, depending on which branch of Nichiren tells the story.

Most of the following years, were spent in exile and he used this time to write lots of treaties (around 700) and build his school. He build a temple on mount Minobu and spent the rest of his life there.

At his death, he appointed 6 disciples(Nisshō (日昭), Nichirō (日朗), Nikkō (日興), Nikō (日向), Nichiji (日持), and Nicchō (日頂)) to continue his work. They each took a slightly different path in their teaching of the Nichiren doctrine so many branches and sub-branches of Nichiren were then formed. The difference between them is often just in their interpretation of Nichiren’s role in history and the object of worship ( the Gohonzon).

Feel free to send me a message about any mistakes I made.