Buddhism in Japan has a long history. It has arrived through
Korea and China and was synonymous of civilization. Now it permeates
Japanese society. The beauty of Japan would be very different if it
hadn’t been influenced by Buddhism and the Zen school.

Go
here for facts about Buddhism in Japan 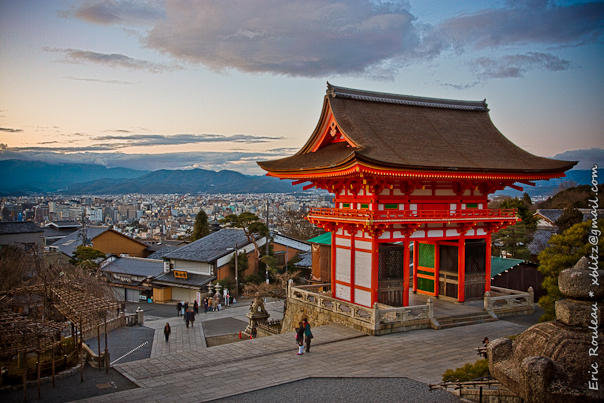 True, the nature and misty
mountains of Japan are beautiful enough
by themselves and in a way it can be said that they really influenced
how Buddhism has developed in this land. The history
of Buddhism is Japan is quite interesting.

Japan’s native religion, Shintoism, was unique among the
religions
of the world as it allowed other Gods and beliefs to be incorporated in
it’s already complex cosmology. Buddhism has thus lived alongside, and
many times in fusion with Shintoism and it really gave it a local
color. Today, it is said that you live a Shintoist and die a Buddhist.
This is why
Japanese funerals are usually Buddhist.

Take also into account that the warrior cast, called samurai,
was
encouraged to pursue an aesthetic and an artistic life in combination
with
the martial arts. A true gentleman was equally apt at poetry,
calligraphy, painting, tea ceremony and slaughtering his enemies. Zen
was
the favorite sect among the warriors and brought a whole level of
complexity to life that shows even today.

Through Japanese history, Buddhism took such a central role,
that
some temples were stronger, richer than most warlords. They had their
own land, their own army and a caste a warrior-monks called the sohei.

The lower castes were not without their own movements and many
schools of Buddhism were developed for them such as the Pure Land sect.

Through all this mix of religions, many teachers coming from
the
main land or prominent Japanese monks started schools or sects of their
own. These schools of Buddhism focus on a different text (okyo) or have a very
different way of seeing things.

Anyone who comes to Japan can experience first hand
the magic
of this land through its various temples, shrines, sacred mountains or pilgrimage
routes.

Follow the different links in the text to learn more about the
topics.