History of Buddhism in Japan

History of Buddhism in Japan

The history of Buddhism in Japan starts when Buddhism was introduced
about 1450 years ago during the Nara period. We can say that it has a
very long history. It all began, according to Chinese records when a
monk delegation from China left for Fusang which might be Japan.

Introduction of Buddhism in the Nara period

The
official introduction, according to the Japanese records actually
happens in 552 CE (some say 538) when monks from Korea, this time, came
to Japan and introduced the principal precepts of Buddhism and brought
some treasures with them.

The first years were not actually easy as Buddhism became one more
tool in the struggle for power over the imperial dynasty by the Soga
clan over the rival Mononobe and Nakatoni clans.

The story goes that Emperor Kinmei, not sure what to do with these
gifts, consulted with his advisors. The advisers were divided in two
camps:

Soga no Iname said that Japan should adopt Buddhism as it was the
religion all the powerful and civilized countries had and Japan,
striving to be powerful should imitate them (sounds like a Meiji
rethoric).

The other clan consisted of Mononobe no Okoshi and Nakatomi no
Kamako. They rejected Buddhism saying that if they adopted it, the
local dieties would undoubtely be angered.

The Sogas seized to opportunity to promote Buddhism and other
“Western ideas” (from China and Korea) like Confucianism and other
governmental and cultural models from China. For them it was a way to
civilize Japan and give power to the emperor.

The rival clans opposed the Buddhism as a foreign invasion and when
an epidemic started after the importation of a statue, they claimed the
local Kami were not in agreement with the new religion. They threw the
idol in the river and burned the temple to the ground.  (That
statue was retrieved and now is in Zenkoji, Nagano.) 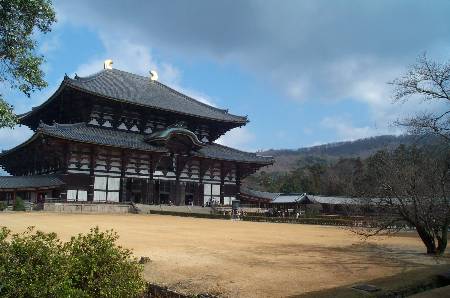 A 50-year long war insuded where temples were burned and the
power-struggle finally moved in the favor of the Soga Clan. Buddhism
finally began to take hold. They way it happened is refered as an
accident. When a second statue was imported and enshrined in a temple,
another epidemic started in Japan. Seeing this, the opponents destroyed
the temple and the image once more. This time, though, the epidemic did
not subside but increased in virulence.

This was seen as divine punishement for cracking down on Buddhism
and The Soga’s were then given permission to embrace Buddhism privately.

Yomei became emperor in 585 but became sick the very next year.
Wishing to recover his health, he decrlared his devotion to Buddhism at
the suggestion of the Soga clan. This marks the point where Buddhism
became official in Japan.

It was a very aristocratic religion though and only the elite practiced it at first as only them had access to the texts.

During this period some famous figure emerged like En-no-Gyoja, a
“folk priest” combining Buddhism, Shamanism and Taoism. He started a
religion called Shugendo which is still practiced today all over Japan.

Some great temples were erected during the Nara period. Such famous
temples as Todai-ji -home of  the Great Buddha- and Hokki-ji are
still famous today and are among the most visited in Japan.

The Kamakura and Muromachi periods

The Kamakura period (1185-1333) corresponds to a long shogunate by
the  Minamoto clan. During this period, Buddhism took another
ideological turn with the introduction of schools of Buddhism for the
masses like the Pure Land schools and philosophical schools like Zen which were adopted more by the elite Samurai class.

The Muromachi period (1333-1573) is when the Minamoto lost power and
the emperor was restored for a brief period of time (3 years only!) and
the following Shogunate by the Ashikaga clan. This clan was not as
strong as the previous Minamoto clan so this period is on of social
rife and civil war.

This period saw the rise of martial idealism and Zen was closely
linked to the samurai class. The Rinzai school of Zen accomplished
considerable development during this period.

Buddhism during the Edo period (1603-1868) was
equal to the other aspects of this period. Japan was at peace and
artistic and economic developments marked this era. Buddhist temples
were built, art was made and every schools enjoyed a golden era.

During the years following the Meiji restoration, Shinto was made
the official state religion in an effort to justify the emperor as the
direct descendant of the sun goddess Amaterasu. This resulted in a slow
but sure decline of the hold Buddhism had in Japan. After the second
World War, when the United States forced the separation of state and
religion, schools stopped teaching about religion and it became a
family tradition to teach the rites to the younger generation.

Nowadays, young people have very little interest in Buddhism and
traditions are lost. According to some sources, some 100 temples are
closing every year around the country, mostly small, family run temples
or poor temples, deserted by the followers.