Yakushi Nyorai is the medecine Buddha and very important in Japanese Buddhism. Here is a short biography of him with his mantra.

Buddhism, especially esoteric Buddhism, has a very elaborate pantheon
of Buddhas and othe dieties.  Yakushi Nyorai is one of them.
He is not a major Buddha in its importance but he is in the
tier 2 ranking.  He is very important and popular in
Tibetan, Tendai and Shingon (the 3 major esoteric schools). 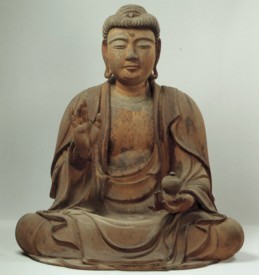 photo courtesy of the Jushi city Board of education

Yakushi (Baisajyaguru in Sanskrit) is called the medecine
Buddha in English.  His Chinese characters mean： 薬:
Medecine and 師: master (as in teacher).  He is cherished in
Japan as he is the master of the Eastern Pure Land (Lapus Lazuli) and
helps people in this mortal life by granting them relief  from
illness.

According to the texts dedicated to him (theYakushi-kyō)
, he  was a Boddhisatva who made
twelve vows upon becoming a Buddha.  The twelve vows are:

Most of the time, Yakushi Nyorai is depicted seating, draped
in simple robes .  His right hand is often held up, palm open
and facing the viewer, with fingers slighty curled.  This is
the mudra (hand gesture) of Semui-in having the meaning of “fear
not”.

In hs left hand, he very often holds a small jar said to
contain medicine or a magical emarald capable of healing.

If you look at the very top of this page, you’ll see another
picture of Yakushi and you can also see these characteristics.

When in temples, his statues are often surounded by others.
Most of the time, it is flanked by statues of the twelve
heavenly generals, each representing one of his vows.  Other
times, Yakushi is also flanked on the left by the Nikko (sunlight)
Buddha and on the right by the Gakko (moonlight) Buddha.

He is very popular in the Kansai area of Japan as it is where
Buddhism first took hold in Japan and he was one of the first Buddha to
come to Japan.  Older temples, especially in the Tendai and
Shingon traditions, are dedicated to Yakushi Nyorai. 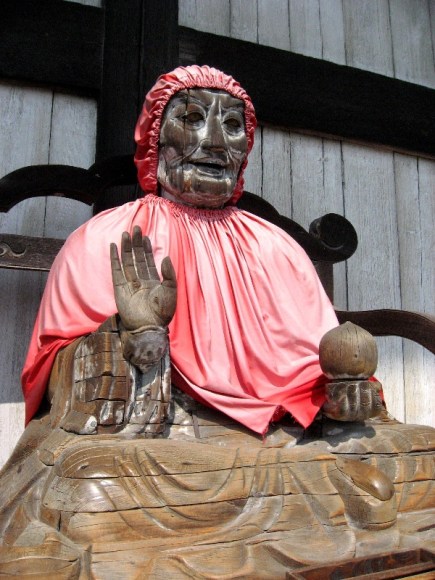 It
is not uncommon for worshippers to rub the statues of Yakushi Nyorai
while praying for healing.  They usually rub the corresponding
area on the statue and then rub their own afflicted area. It is said to
grant healing.

The statue to the left is in Todai-ji, Nara, just outside the
main hall where you can see the Big Buddha.

Calling the name of Yakushi, the medecie Buddha, is said to enlist his assistance.
The Sanskrit reading of his mantra is Om huru huru candāli
mātoungi svāhā.

I’m not a very religious man but upon visitng Hieizan (the
headquarters of the Tendai sect) I prayed at the site dedicated to
Yakushi Nyorai and I had a vision of him welcoming me in a land filled
with his followers who made the vow to help heal the rest of the world.
I took it as a sign that my chosen profession,
massage therapist, was  the right one for me.

I later bought a small sandalwood statue of him and it now
adorns my altar.