Jodo Shu or Jodo Buddhism, a branch of Pure Land Buddhism, is the most popular branch of Buddhism in Japan. It was established in 1175 by the Japanese ex-Tendai monk Honen.

The pioneer Honen was born in the village named Inaoka in the township of Kume in Mimasaka province. The place is presently known as Okayama Prefecture. He was born in a leading family of the said province in 1133. Following the assassination of his father by a rival official, Sada-akira, he was sent to his uncle’s temple to carry out the final words of his father Uruma no Tokikuni. He was then 9 years old.

While teaching Buddhism to Seishi-maru (original name of Honen), his uncle Kangaku who was the younger brother of his mother, perceived the potential and the intelligence of Seishi-maru. Therefore, he sent him to Mount Hiei to acquire higher Buddhist teachings. He was then 13.

After 5 years, now 18, he was discontented by Tendai Buddhism and went studying with Jigem-bo Eiku, a hermit in the Kurodani valley, who named him Honen-bo Genku.

After the completion of his studies with Eiku, he traveled from place to place, temple to temple, capital to capital in search of the way to universal salvation. Honen studied all the Buddhist scriptures three times and Shan-tao’s ‘Commentary on the Meditation Sutra’ five times. At the age of 43, he discovered the path to salvation through realizing the truth of the Nembutsu (The mantra なむ あみだ ぶつ Namu amida Butsu) 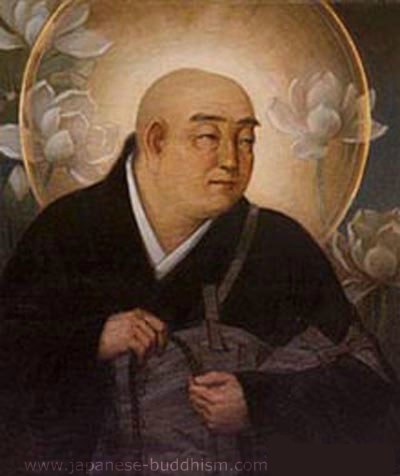 Although the Nembutsu had been practiced before Honen, it was Honen who first elevated the Nembutsu to an absolutely independent practice.

Honen chose Yoshimizu to be the center of his teaching. The Main temple of The Jodo Shu of Buddhism is ‘San’en-zan Kodo-in Zojoji’ which was founded after his death in 1393 in the Kanto region. The temple was relocated to the present site in 1598 after Ieyasu Tokugawa, founder of the Tokugawa shogunate, entered Tokyo (then Edo) in 1590 to establish his provincial government. 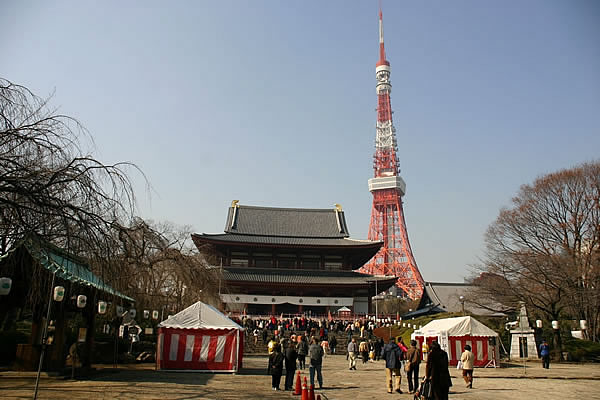 Zojoji Temple, with the Tokyo Tower in the background.

At the request of his patron Lord Kujo Kanezane (1148–1207), Honen’s main document expatiating his Pure Land doctrine the ‘Senchaku Hongan Nenbutsushu’ was written in 1198. At Honen’s request, the document was not widely distributed until he died. It consists of 16 chapters and occupies 20 pages in the Taisho canon.

The ‘Ichimai Kishomon’ or ‘One-Sheet Document’ is the other only document he wrote and it was his last testament. On January 23, 1212, he wrote the ‘One Sheet Document (Ichimai-Kishomon)’ at the request of Genchi, his closest disciple. In the document, Honen stated the essence of his faith, asserting that the Nembutsu is the only ultimate way of universal salvation, so make every effort to practice it without bothering with your own finite knowledge. The full text of the ‘One-Sheet document’ is as follows:

“In China and Japan, many Buddhist masters and scholars understand that the Nembutsu is to meditate deeply on Amida Buddha and the Pure Land. However, I do not understand the Nembutsu in this way. Reciting the Nembutsu does not come from studying and understanding its meaning. There is no other reason or cause by which we can utterly believe in attaining birth in the Pure Land than the Nembutsu itself. Reciting the Nembutsu and believing in birth in the Pure Land naturally gives rise to the three minds (sanjin) and the four modes of practice (shishu). If I am withholding any deeper knowledge beyond simple recitation of the Nembutsu, then may I lose sight of the compassion of Shakyamuni and Amida Buddha and slip through the embrace of Amida’s original vow. Even if those who believe in the Nembutsu deeply study all the teachings which Shakyamuni taught during his life, they should not put on any airs and should practice the Nembutsu with the sincerity of those untrained followers ignorant of Buddhist doctrines. I hereby authorize this document with my hand print. The Jodo Shu way of the settled mind (anjin) is completely imparted here. I, Genku, have no other teaching than this. In order to prevent misinterpretation after my passing away, I make this final testament.”

Honen’s reasons for reciting the Nembutsu can be well defined in these two statements:

“If, because it is taught that birth is attained with but one or ten utterances, you say the Nembutsu heedlessly, then faith is hindering practice. If, because it is taught that you should say the Name without abandoning it from moment to moment, you believe one or ten utterances to be indecisive, then practice is hindering faith. As your faith, accept that birth is attained with a single utterance; as your practice, endeavor in the Nembutsu throughout life.”

“Only repeat the name of Amida with all your heart. Whether walking or standing, sitting or lying,never cease the practice of it even for a moment. This is the very work which unfailingly issues in salvation…” (Honen quoting Shan-tao)

Actually, Honen offered mankind a simple Buddhist practice anybody could use toward Enlightenment. All he said was- a being may be reborn, through Amida’s compassion, in the Pure Land where one can pursue nirvana more readily. All though other Buddhist practices were not practical on a wide-scale, particularly during the difficult times of the late Heian Period, Honen never said they were incorrect.

Besides reciting the Nembutsu, he encouraged practicionners to engage in ‘auxiliary’ practices, such as observing the Five Precepts, meditation, the chanting of sutras and other good conduct.

People from different walks of life including not only priests and nobles, but also warriors, ex-robbers, fishermen and even prostitutes were appealed by Jodo Shu. Among the priests attracted to Honen’s teaching, Shoku, Shoko, and Shinran are important, because these honored followers lately gave birth to the other denominations of Pure Land Buddhism in Japan.

Shoko (1162-1238) accompanied Honen in 1197 when he was 36 years of age. After learning Honen’s teaching, he went to Kyushu and propagated the true light of the Nembutsu. He is considered to be the second patriarch of Jodo Shu, Honen being the first. Shoko (now known as Bencho) maintained the main branch of Jodo Shu named ‘Chinzei’. Shinran (1173-1262) became a disciple of Honen in 1201 at the age of 29. He is regarded as the founder of Jodoshin-shu, or the True Pure Land Denomination. The great Honen passed away on January 25, 1212 at the age of 80.