Fudo Myo-o is one of the important deities of Japanese
Buddhism.  His statue can be seen in so many places in Japan
that it’s not uncommon to find one near a waterfall or simply by a
mountain path.

His
Sanskrit name is Ācala and in
Japanese his name is written 不動明王.  It literally means
“The immovable wisdom king”.  He is the guardian of
Buddhism and one of the five Wisdom kings along with Gōzanze, Gundari,
Daiitoku and Kongōyasha.  As such, he is the central figure
and when the Five Wisdom Kings are represented together, he usually is
in the middle. 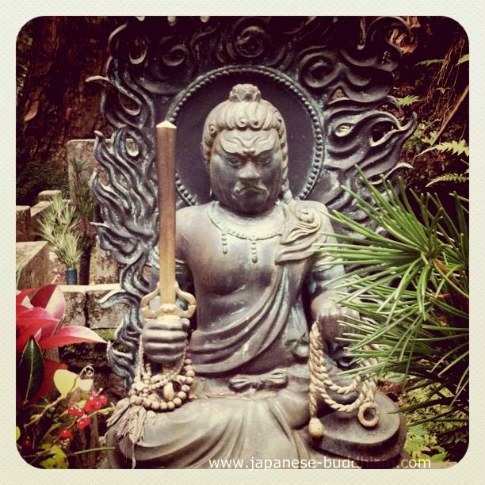 Fudo Myo-o has a scary appearance to be able to frighten
people into accepting the salvation brought forth by Dainichi-Nyorai.
(I’m not sure if this is a good thing but maybe it means that he looks
frightful to remind them of the demons awaiting for them in hell if
they don’t) He converts anger into compassion and cuts the ties of
negative feelings and demons to liberate us from suffering through
self-control.
His vow is to bring forth the teachings of Dainichi–Nyorai to the
world.

He also battles evil with his immovable faith and his
compassion. Furthermore, Fudo Myo-o is the guide for the deceased souls
and in this fashion; he presides over a funeral ceremony held on the
seventh day after death.

He was originally a Hindu deity that was adopted in Buddhism
and I remember having read that he is related to the Goddess Kali, the
destroyer of world.
This might be because of the similar appearance and the flames
surrounding both. I couldn’t find any proof of this though.

Fudo Myo-o is very important is Shingon Buddhism and he is at
all the major temples and has some statues scattered around pilgrimage
roads.  Many waterfalls are named after him as a certain
practice involves standing under the rushing icy water to purify one’s
soul of all desires and attachments. 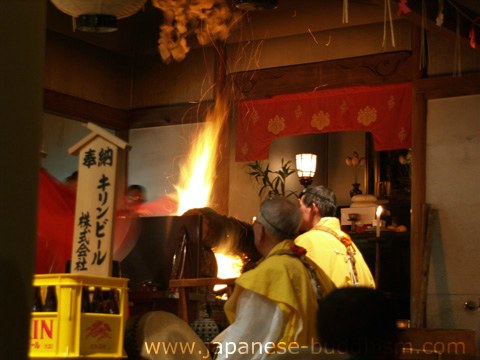 Another ceremony is called the Goma
Shiki and it consists of burning wooden tablets where wishes have been
written and consecrate them to Fudô Myo-o.

Shugendo, a religion
mixing esoteric Buddhism , Shintoism and Shamanism, relies heavily on
the cult of Fudo Myo o and he is considered the main deity. 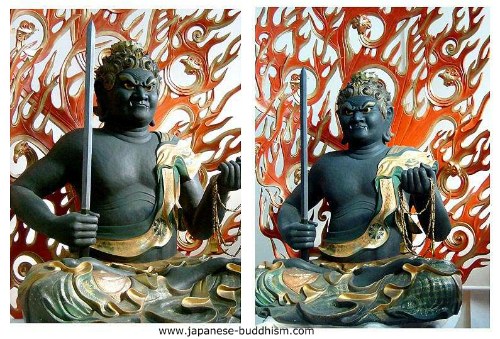 Fudo-san (as he is most usually called in
Japan) is a fierce
looking monster.  For someone who doesn’t know better, he
looks exactly like a demon.  This is not the case
though.
Fudô Myo-o is usually surrounded by flames, often painted bright red or
orange, even in stone statues.  They represent the burning of
anger and passion to purify the mind.
He usually stands or sits on a rock which represents his determination
to stay where he stands (his immovability).
Fudô Myo-o holds a rope in his left hand, used to catch and bind demons
and a sword called “Kurikara” or devil-subduing sword to, well, you
guessed it, subdue the demons.  It is also used to cut through
ignorance.

His face is contorted in anger, his eyebrows elevated and his
mouth
grimacing menacingly.

He usually has two fangs protruding from his mouth: one
pointing upwards (represents the strength of his desire to progress
upward in his service for the Truth) and the other one pointing
downward (represents his unlimited compassion for those suffering in
body and spirit).

He also often has a third eye, representing his capacity to see all.
His skin is usually a very dark blue, near black.
Finally, his hair is braided on the side of his head in the manner of a
servant to represent his service to all sentient beings.

This is the mantra of Fudo-san:

My personal experience with Fudo Myo-o 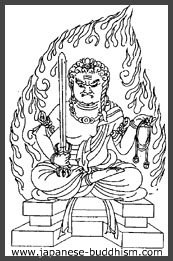 I have had a close relationship with Fudô Myo-o for some years now.
My Shingon Buddhist friend introduced him to me many years ago,
explaining that he was his patron deity.  He gave me his
background and history and we went to a few temples, some
waterfalls and we did a few Misogi Harai under waterfalls (he did one
in the dead of winter when the temperature of the water must have been
very close to the freezing point.)

In 2000, I moved to Fukui city in Fukui prefecture and I was sent to an
apartment right next to a Tendai temple dedicated to Fudô
Myo-o.  My apartment building was called Fudo Mansion which
really means immovable mansion.  It made me feel safe in this
country of earthquakes.

I often went to the temple next door and prayed to the
numerous statues of Fudo-san.

Once back in Canada, I started doing massage a profession and
like many other massage therapists, I started having wrist problems
because I used my articulations too much, I was hurt.

That day, I remember clearly, my wrist had been painful for
the best part of the week.  During a massage, I was at the
feet of the woman and I suddenly felt a huge anger welling from deep
within me.  I wasn’t angry at anything in particular but that
anger came very quickly and it was gone as quickly.  I
remember thinking about Fudô Myo-o at the moment.  Well, after
the anger had subsided my pain was gone!  I attribute this
healing to Fudo and even though it’s nothing really extra-ordinary like
cancer, it really gave me a renewed respect for this deity.

Now, I like to look for temples with statues of this deity as
I prefer the energy (esoteric) of these places over the more sterile
energy of other temples.

If you would like to see more pictures and some other
characteristics of Fudo Myo-o I recommend visiting Mark
Schumacher’s excellent site.

If you would like to read more on Fudo, Shugendo or Shingon,
you can read this excellent book: The Catalpa Bow