What happens to the soul of the victims of the tsunami?

What happens to the soul of the victims of the tsunami? 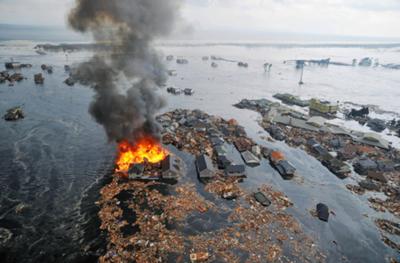 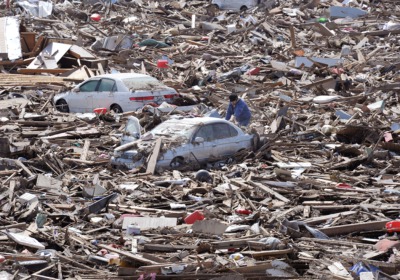 A survivor looking for personal effects in debris 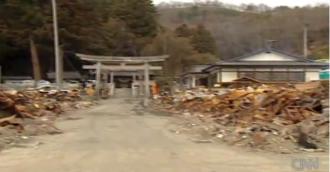 I understand that Japanese buddhism generally requires an elaborate and ritualized funeral for the deceased, including cremation to free the spirit. However, in the current situation in Japan, many people have been lost and their bodies never found. Does Japanese Buddhism provide some way to comfort relatives who cannot follow the usual funerary practice for their lost loved ones or do those left behind worry constantly that souls are restless and without peace? Is there some provision to free the soul without having a body to cremate?

Thank you for the question Gail.
What has been happening here, in Japan, is far from fun and it is not over. As I write this, in April 2011, the power plants in Fukushima are still not under control and the level of radiation sent in the atmosphere forced the authorities to raise the alarm level to 7 which is to par with Chernobyl. (It is the highest level on the scale but Fukushima is not as bad as Chernobyl yet, only a tenth of the radioactivity spread by Chernobyl has so far leaked.)

If you have not yet done so, I ask you to give to the Red Cross to help support the victims, who still live in shelters.

People are still looking for the remains of the disappeared and they are still not sure how many people are missing. It is made difficult because sometimes, the whole family is missing so they don’t know exactly who is missing.

When they find and identify a victim, they give the remains to the family so that final rites can be performed.

Now, it is true that cremation of the body speeds up liberation of the soul but it is important to know several facts:

According to a Japan Times article (http://search.japantimes.co.jp/cgi-bin/nn20090728i1.html) burial were the norm before and during the war. This is mostly because the cost of wood was high and the cost of land for cemeteries was still cheap.

After the war, when no more land was available for cemeteries, cremation became the norm.

It was popularized at first with the coming of Buddhism to Japan for monks and the aristocracy and stemmed from a Soto Zen funeral rite. Apparently, the historical Buddha had been cremated and his remains put into a Stupa. For this reason, people hoping to enter Nirvana, followed the tradition.

What happens to the soul according to Japanese Buddhism tradition?

According to Japanese tradition, when a person dies, her soul leaves the body and goes to a place called the river Sanzu ( It has three crossing points: a bridge, a ford, and a spot where there is only deep serpent-infested water. Where one crosses depends on the weight of one’s offenses while alive.)

It is quite similar to the river Styx in Greek mythology. To pay for passage, people put 6 coins in the coffin of the deceased. It is believed that the soul takes 7 days to reach this spot. This is the reason why there is a first ceremony 7 days after death.

All around Japan, on the 7th day after the earthquake, several ceremonies were jointly organized for the soul of the missing and deceased.

The soul will also naturally perform the necessary 49 day long migration to the other world, awaiting rebirth. Ceremonies are to both ensure that the soul doesn’t get lost or trapped in between worlds and to alleviate the families’ suffering.

Chances are that most soul will be believed to make the journey safely. Some might get lost though, especially the unknown dead for whom no ceremonies were performed because no one knows they are missing.

To prevent this, priests are making anonymous ceremonies.

I am sure many people will find the different affected areas haunted though, as they will believe some souls to be trapped in the area but some exorcism ceremonies can be performed to help those lost souls go on their way.

You can help by praying yourself for the missing and the survivors.

Any comments?
please add them at the bottom.