The Swastika in Japan

The Swastika in Japan

We can often see the swastika symbol in Japan. Does this
mean that Japan is fascist and anti-semite? I guess that you understand
that asking the question is answering it. It is true that Japan was an
ally of Hitler during the second world war but it had no connections
with Jewish people whatsoever (except some legends claiming that a tribe
of Israelites ended up in Japan) so they didn’t have any connection
with the anti-semite movement. 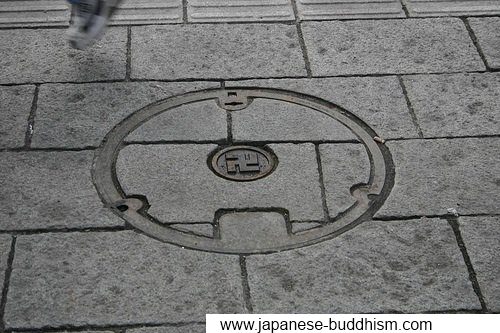 The symbol of the swastika is a well documented ancient
symbol used around the world. It’s first recorded occurence dates all
the way back the the 6th to 5th millennium BC when it was used in the
“Vinca script” of Neolithic Europe. After that it has been used by
primitive society consitently from China to the Americas passing by
Greece and Africa.

A manhole in Hirosaki, Japan

The word swastika come from the Sanskrit and it means “that which is
associated with well-being.” Its meaning is one of luck, well-being. It
has been used consistently around the world, even in the U.S. as a
good-luck charm, especially by early aviators.

Native americans and Chinese also used it to represent the sun.

The Swastika in the East

The crooked cross is a historical sacred symbol in all
Indian religions. It is used in Hinduism, Buddhism and Jainism. It rose
to importance in Buddhism during the Mauryan
Empire and in Hinduism with the decline of Buddhism in
India during the Gupta Empire. It followed the silk road with
Buddhism to reach Tibet and China. The symbol was also introduced
to Bali with Hinduism by Hindu kings. The use of the
swastika by the Bon faith of Tibet, as well as later
religions like  Cao Dai of Vietnam and Falun
Gong of China, can also be traced to Buddhist influence.

Many Buddhist texts start with this symbol, thus it has started being
used in Japan as a symbol representing temples, especially on maps as
the torii gate represents Shinto shrines.

If you look at the map of Kyoto above, you’ll notice many instance of the swastika. 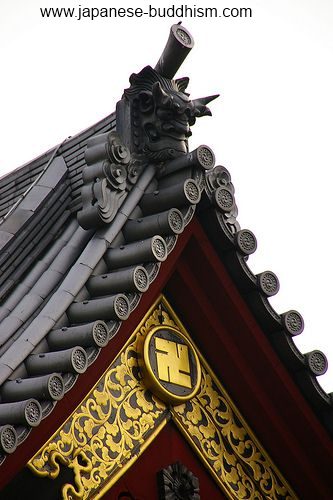 In Japan, the swastika is called manji 万字, which comes
from China. The first character, man, means 10,000 which is a big enough
number to represent a myriad, or infinity. The second one, ji, is
simply character. thus it is called the infinity character.

It is usually facing counter-clockwise. Meaning that the
arms of the cross are turning in a counter-clockwise pattern. This being
said, it is not uncommon to see it facing the other way and it is
called a mirror-image of the manji.

The signification is the same though and it is still not associated with the Nazis in anyway. 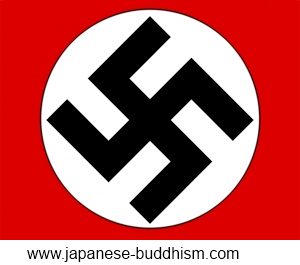 So much so that there is another name for the Nazi’s
symbol in Japanese. My Japanese dictionary calls it the Ha-kenkoroitsu
(from the German word Hakenkreuz, crooked cross ) and it describes it at the 45-degree clockwise manji used by the Nazi party.

That symbol is usually surrounded by a circle. In Japan
it is unusual to see the manji at that angle. It is usually flat on one
of its side.

I hope this will help dampening the shock I hear many
foreign visitors expressing when they visit Japan. The manji has been
used for thousands of years as a positive symbol and only in the last 70
years has it been associated with the signification it holds in the
Western world. It is a victim of its usage by the Nazis, really.

Just remember that in Japan, this symbol represents a Buddhist temple when seen on a map.

Would you like to add something to this topic?

Your opinion or comments are important to us. Write something about what you just read and share it with us.

What Other Visitors Have Said

Click below to see contributions from other visitors to this site...

About Swastika in Japan Not rated yet
It should be clear that Swastika came to Japan via China.The origin of this Swastika as far as Japan and China is concerned is India and India only. And …