What are the reasons behind the Buddhist monks in northern Japan who decided to mummify themselves? 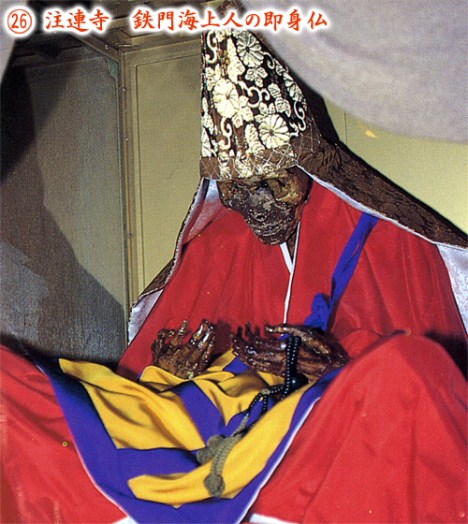 What you are referring to is the practice called sokushinbutsu. Even though, I was aware of them, I had never really researched the subject. Thank you for your question, it gave me a chance to do the research.

I will first answer your question and then explain what the process is, for those who are not acquainted with it.

In Buddhism, it is understood that all is just an illusion, as stated in the heart sutra:
“Shariputra, form does not differ from emptiness; emptiness does not differ from form. Form itself is emptiness; emptiness itself is form. So too are feeling, cognition, formation, and consciousness.
Shariputra, all Dharmas are empty of characteristics. They are not produced, not destroyed, not defiled, not pure; and they neither increase nor diminish. Therefore, in emptiness there is no form, feeling, cognition, formation, or consciousness; no eyes, ears, nose, tongue, body, or mind; no sights, sounds, smells, tastes, objects of touch, or Dharmas; no field of the eyes up to and including no field of mind consciousness; and no ignorance or ending of ignorance, up to and including no old age and death or ending of old age and death. There is no suffering, no accumulating, no extinction, and no Way, and no understanding and no attaining.”
Thus it is to transcend this world of illusion and deny their body that these monks decided to self-mummify themselves. Doing so, they would become Buddhas and would be worshipped by generations of Buddhist as saints.

The practice is closely attached to Shugendo, a Japanese religion mixing Buddhism, Shintoism and shamanic practices. Most of the mummies are in the Dewa Sanzan area of Yamagata prefecture. The mountains are highly sacred in that religion. Shugendo is, like most religion in Japan not exclusive. Most practitioners adhere to either the Shingon or the Tendai sect.

It so happens that all mummies are in Shingon temples and I would argue that the fact that Kukai, the founder of Shingon, is himself rumored to still be alive, in a deep meditation, plays a big part in why they decided to take this ritualistic approach to suicide.

Shugenja, as practitioners of Shugendo are known, are famous for their self-mutilation. You will often see them in mountain roads, leading to recluse temples, and it is not uncommon to see missing fingers or laceration marks on their arms. It is part of their practice. Transcend the body and live in the spiritual world. There is a living saint (Reverend Nakai (Head of Kizo Temple in the village of Yoshino), Nara prefecture who is one of the only living priest to have succeeded the famous 100 day hermitage in a mountain cave.

But this is for another day.

Self-mummification is a long process, taking up to ten years and generally not less than three. The monk would first submit himself to a diet consisting of nuts and bark and have an intensive regimen of physical exercise, in order to reduce his body fat to a minimum as this is the first thing to decompose after death.

The second step was to drink exclusively tea made from the bark of the urushi tree, used to make lacquer. This is highly toxic and would induce vomiting and expiation of most body fluids in order to reduce even more the body mass. It also left toxins in the body that would serve as preservatives after death. They would basically lacquer themselves to death.

Thirdly, when the monk was close to death, they would entomb him in a stone chamber, 3 meters in the ground with a bamboo tube for air. The monk would then sit, recite sutras and meditate all day until his death. He was to ring a bell regularly in order to indicate that he was still alive.
When he went silent, they would dig him up and confirm he was dead. They would rebury them for three years and three months and if his body was preserved after that time, he was considered to having succeeded at becoming a Buddha.

It is believed that hundreds tried but only between 16 and 28 actually made it.

Five mummies that I know that can be visited:

The best reference I found on the web on the subject, even better than Wikipedia are here: