Temple Etiquette is something difficult
to master for visitors to Japan. It’s not every day that we visit a
real Japanese temple with real live monks in it. This quick, easy guide
is meant for people who have never visited temples before or who has
but felt uncomfortable as they didn’t know what to do and why.

First,
we need to make the distinction between a shrine, a touristic temple
and a family-run temple. For the first, please follow the link for an
in-depth explanation. For the last two, it is easy to differentiate.
First, if there is a small building to pay at the entrance, it is a
touristic temple.

Second,
if the temple is devoid of visitor or if there is only an old lady in
the cemetery surrounding the temple, it us a good indicator that this
temple is geared toward families paying homage to their deceased and
there not much else to do than visit the cemetery .

Each
family has an established family temple and burial ground related to a
specific Buddhist sect. Families usually devote themself to that sect
for generation but do not even know, in general, what sect it is.
Unlike churches, the name of the temple will not be an indication of
the affiliation.

The
priests of these temples are not really charged with the propagation of
the Dharma but are mostly performing funerals and memorial ceremonies
when requested.

At
the temple, there is a death register stating the real name, posthumous
Buddhist name, date of death for all the members of the family. 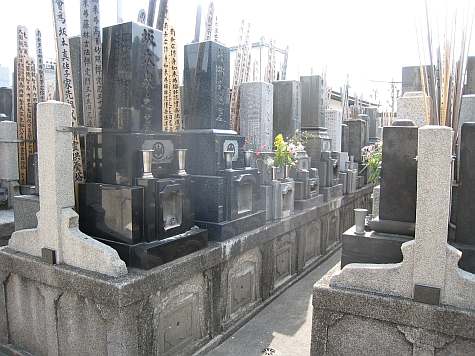 When
going to a Family temple, do not expect to have access to the main hall
or any buildings unless you go there for a ceremony. When the gates to
the grounds are opened it is to give access to the cemetery attached to
the temple.

As far as temple etiquette is concerned, be respectful of the tombs,
do not touch anything and remember that they are people’s last resting
places.

When visiting a large temple, there are several steps you have to
take and several unwritten rules to respect. Temple etiquette is mostly
common sense but I will state the rules here anyway. As a rule of
thumb, do not do anything you would not do in a church, temple or
synagogue back in your home country as temple etiquette is very similar
to any other religious etiquette.

Before leaving for the temple:

Make sure you are dressed conservatively. This means no sexy attire
for women, it’s never appropriate to show off your assets when visiting
a holy place. For men, try to wear pants instead of shorts. It is not
forbidden but you’ll notice that not many Japanese men wear shorts in
public. It’s always better to try to blend in the crowd.

1-There usually is a booth to pay the entrance fee
to the temple. The fee will range from 100 to 500 Japanese Yen, 500
being more common. In exchange for your contribution, you get a ticket
and sometimes a brochure explaining the history of the temple. Ask for
an English brochure if not handed one, they are often available.

2-Next is the purification pavilion called Chouzuya
in Japanese. They are not always present as it is a Shintoist tradition
but many temples also house a shrine so it is not uncommon to see one.
If there is none, just proceed forward. 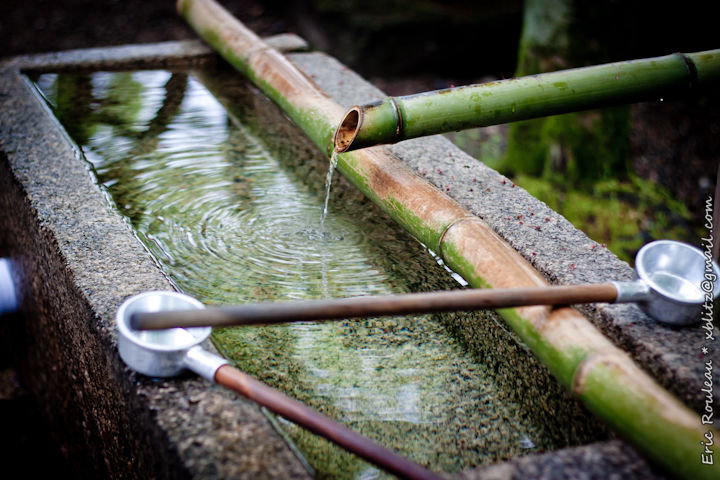 How to purify yourself:

If
there is a basin, usually covered by a roof, with a dragon or a bamboo
pipe sprouting water, use it before going into the temple compound.

3-When it’s time to enter a building, first make
sure you can go in with your shoes. There is sometimes a shelf with
shoes on the side or someone will hand you a plastic bag to carry your
shoes inside. This is particularly true when you will exit from another
place.

4-In a temple, there usually is a raised threshold.
It’s often as high as eight inches. One must not step on it but over
it. This is a common theme all over Asia. It is considered highly
disrespectful to step on the threshold.

5-Once inside, bow toward the main idol, as a sign
of respect. If you are not Buddhist and are afraid of offending your
religion while doing so, just realize that paying respect doesn’t mean
believing in the Buddha. It is a simple sign of respect toward someone
who was highly respected.

6- It is better to remove your hat inside. It is not necessary but it is a sign of respect to uncover your head.

7- Some temples are associated with a shrine. It often happens with Shingon and 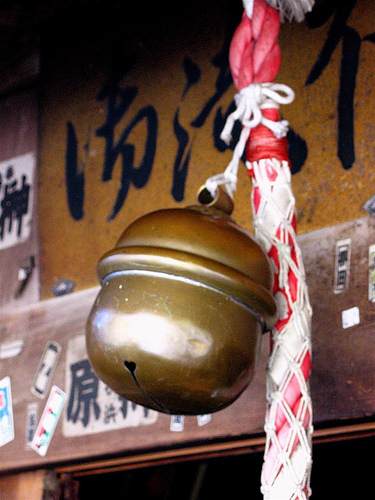 Tendai
temples, especially. In this case, there will be some kind of bell with
a long rope hanging from the ceiling in front of the altar. When this
is the case, you can throw money in the collection box (anything from
10 Yen to 500 Yen will do) and then ring the bell.

After ringing the bell, clap your hands twice, bow once and pray silently.

Clapping is, in Japanese Shinto, the original
sound that separated the elements to form the world. It is used to
attract the attention of the gods. When a shrine is attached to a
temple, it means that the distinction is not really made between a
Buddha and a god.

When you are done praying, bow once more, clap your hands once and back away from the place.

7-a-When there is no bell in front of the altar or
in front of an idol, do not clap your hands, just join your hands in
the gassho position (regular joined hands at chest level used for
praying in many cultures) and pray silently. 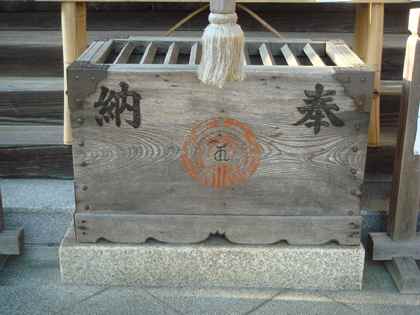 8-You
will often hear some people chanting a sutra, usually the Hannya
Shingyo. If you know it, you can join, but it is not necessary.

9-Do not pass between someone who is praying and
the altar or idol, no matter how far they are. It is like cutting the
connection between them.

An offering box in front of a temple.

10- Do not take pictures with a flash inside the
temple and look for a sign indicating that pictures are forbidden as it
is usually the case.

11-When leaving the building where an idol is, turn toward it at the door and bow once in respect.

Temple etiquette seems difficult but it is quite easy once you
know what you are doing. When in doubt, follow the Japanese. Then
again, many of them don’t know temple etiquette either. (I had to
teach it to my girlfriend.)

Do you have any questions, or corrections on what I explain here? Use this page to join me.