Steven Seagal was recognized as the reincarnation of Chungdrag Dorje

In today’s world, more and more
people proclaim to be Buddhist celebrities. Being Buddhist in Hollywood
has its perks as it is an instant image booster. Whether it’s Richard
Gere being in the Dalai Lama’s intimate circle, Steven Seagal being the
reincarnation of a rinpoche, or Tiger Woods, the followers of the
Buddha enjoy an instant boost in their coolness factor.

There was some confusion and controversy as of why he was thus
named a reincarnation. Some claimed that he bought his way into
Buddhahood. His teacher felt the need to write a clarification 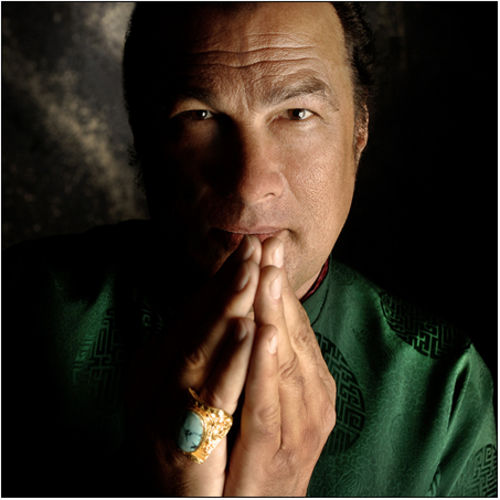 Mr. Seagal is a controversial man especially because of all
the rumors going around about him. There are some rumors of CIA
involvement, sexual slaves and hit contracts put on some of his
enemies. To say the least, he is perceived as a very egoistical
character, something that doesn’t conciliate well with the views people
have of a compassionate Buddhist monk.

Here is what Penor
Rinpoche had to say about him: “In the case of my student Steven
Seagal, I initiated the decision to recognize him as a tulku based on
my own feelings about him. Neither I nor any of my monasteries have
received or sought any sort of substantial donation from him. What is
important to me are the qualities I have seen in my student. For this
reason I feel confident that recognizing him as a tulku will be of
benefit to others as well as to the Buddha dharma.”

Seagal is
also highly respected for some other things. He has described his
activism as forcing companies to change. We can see the influence his
activism played in films like On Deadly Ground and Fire Down Below.

He has worked with People for the Ethical Treatment of Animals (PETA)
to discourage the fur trade, and has written to the Prime Minister of
India to seek increased legal protection for cows. Seagal worked
effectively towards saving dogs destined to drown in Taiwan.

In 1999, Seagal was awarded a PETA Humanitarian Award.

In 2003, Seagal wrote an open letter to the leadership of Thailand,
urging them to enact a law to prevent the torture of baby elephants.

Outside
of his film work, Seagal has volunteered, lending his voice as a
narrator for an activist film project, Medicine Lake Video, which seeks
to protect sacred tribal ground near his ranch in Siskiyou County.

What is a tulku and Who was Steven Seagal in his previous life?

Again let's refer to the words of Penor Rinpoche:"Traditionally a tulku is considered to be a reincarnation of a Buddhist master who, out of his or her compassion for the suffering of sentient beings, has vowed to take rebirth to help all beings attain enlightenment. To fulfill this aspiration, a tulku will generally need to go through the complete process of recognition, enthronement and training.

Formal recognition generally occurs soon after a tulku has been identified, but only after other important lineage masters have been consulted. The newly identified tulku does not take on any formal responsibilities at the time of recognition.

Finally, a tulku needs to complete a formal course of training which includes years of study and meditation. This training reawakens the tulku's powers of insight and compassion and develops their skillful means for helping others. It is only after such training that a tulku is ready to take on the role of a teacher."

About who he was: "Steven Seagal has been recognized as a reincarnation of the 17th century hidden treasure revealer (terton) Chungdrag Dorje (khyung brag rdo rje) of Palyul Monastery. Chungdrag Dorje founded a small monastery called Gegon Gompa near his native village of Phene in the Kutse area of Derge in Eastern Tibet. Though there are no monks there now, the small monastery building still exists and is well known in the area for its beautiful religious wall paintings.

As a terton, Chungdrag Dorje rediscovered teachings and sacred objects hidden by Padmasambhava in the eighth century. Such treasures (terma) were concealed with the intention that they would be discovered and revealed at a later date when the circumstances were such that they would be of particular benefit to sentient beings. Texts of the teachings discovered by Chungdrag Dorje have apparently not survived the Chinese Cultural Revolution. Sacred objects discovered by Chungdrag Dorje include an unusually shaped bell, a phurba (ritual dagger), the syllable 'A' carved in stone and pigments used to create the sacred wall paintings in his monastery mentioned above. Several of these objects have been preserved and are still kept at Palyul Monastery today."

All in all, Seagal is a man who wants to be and do good. I respect that about him.