One of the most visited temple of all Japan is Kiyomizu
temple, in Kyoto-city. Kiyo (清) means clear or pure and mizu (水) means
water. Thus the temple of pure water, a well deserved name for the
delicious water coming from a spring nearby is much sought after. 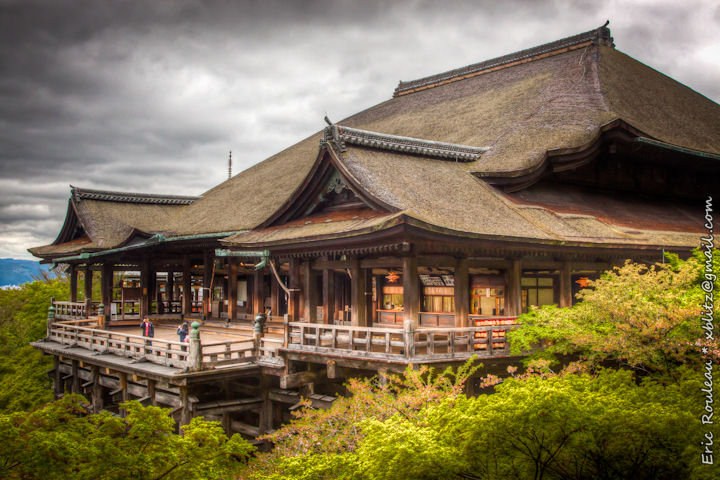 Kiyomizu temple is really a beautiful temple, on the
mountain-side above Kyoto. On a clear day, it offers a nice view of the
whole city. 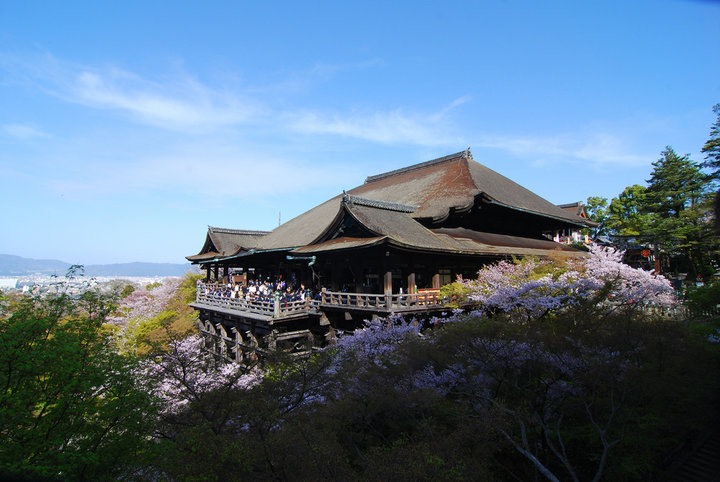 In the spring, many cherry
blossom trees decorate the temple in a spectacular way, giving visitors
one of the most beautiful views in the city. It is surpassed only by
the fall season, where the colored maple trees are simply breath-taking. 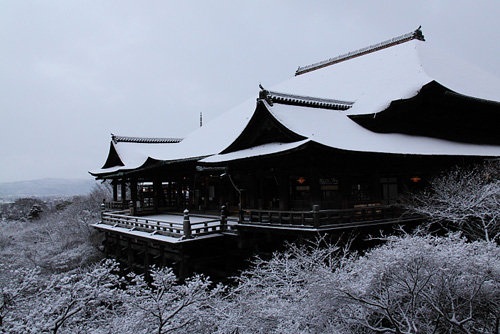 All four seasons are spectacular in Kiyomizu Temple. 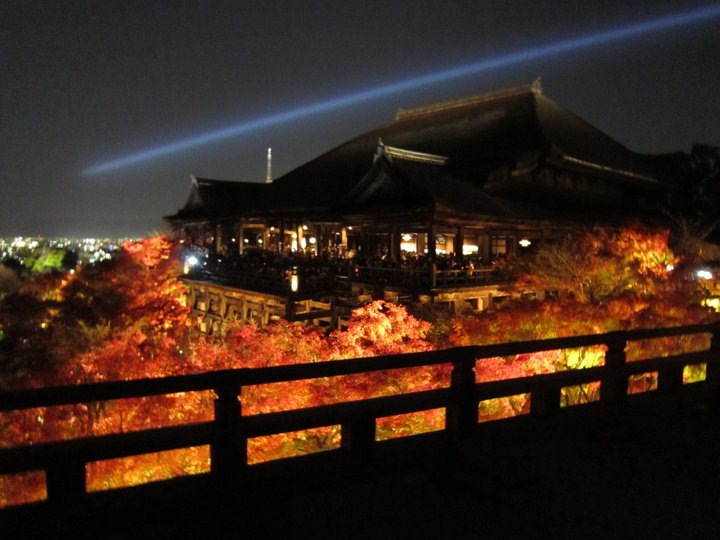 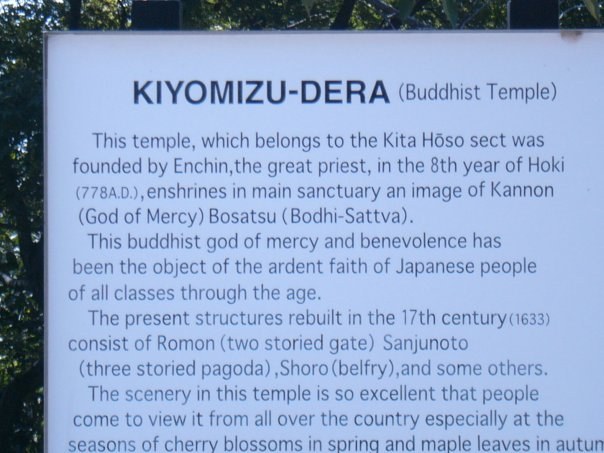 Kiyomizu-Dera was founded in 778 by Enchin and belongs to the
Kita Hôso sect.

Not one nail is used in the whole temple. It takes its name
from the waterfall within the complex, which runs off the nearby
hills. (the waterfall is behind the photographer in the above
pictures)

It was originally affiliated with the old and
influential Hossō sect dating from the Nara era but,
in 1965 it changed the affiliation to the current one. 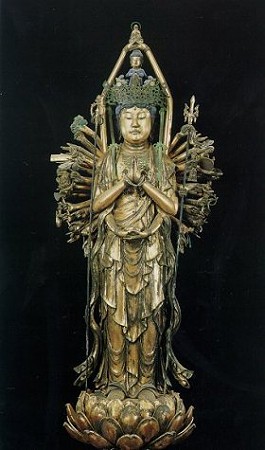 The current buildings were built in 1633 during
the restauration ordered by the Shogun Tokugawa Iemitsu.

The temple is dedicated to the eleven faced and forty-two arms
Kannon bosatsu.(to the left) This main object of worship (Gohonzon) is
a national treasure.

Other statues in the temple include Bishamonten (below) and
Jizo. 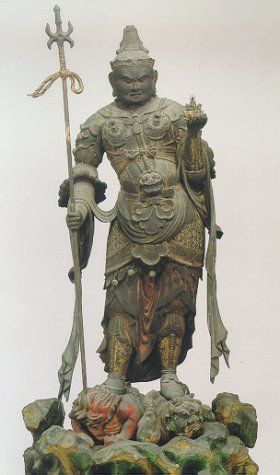 Kiyomizudera can be reached from Kyoto Station in about 15
minutes by bus. Take bus number 100 or 206 and get off at
Kiyomizu-michi or Gojo-zaka. You then have to climb up the steep hill
lined up with shops, restaurants and Japanese inns called ryokans. It
takes about 10 minutes. I recommend browsing the shops on your way up
but you’ll have more time to visit on the way down.

Here is what you can expect to see on your way up: 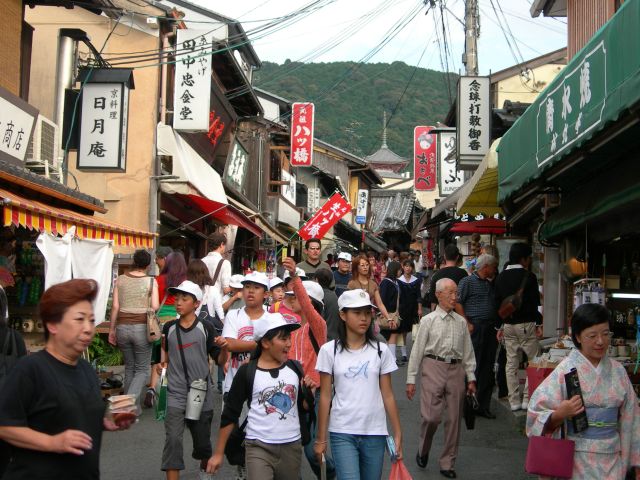 Things to do at Kiyomizu Dera

Once in the temple compound, you can visit the many different
areas of the temple.

First off, there is the main gate at the entrance, painted red
and white, this gate separates the mondain world with the sacred but it
doesn’t stop the throng of people heading, like you to the temple.
Right there, there is a corner where you can get a nice picture of
Kyoto, with the tower in the background.

Near the entrance, just to the left of the pagoda, there is Tainai-meguri (admission
¥100; 9am-4pm), There you can enter the womb of Daizuigu Bosatsu, a
female Bodhisattva who has the power to grant any human wish.

Let’s just say that the experience is both peaceful and very
beautiful in its own way. You are plunged in a pitch black hallway and
meant to find a glowing stone. Walk slowly and feel for the walls. 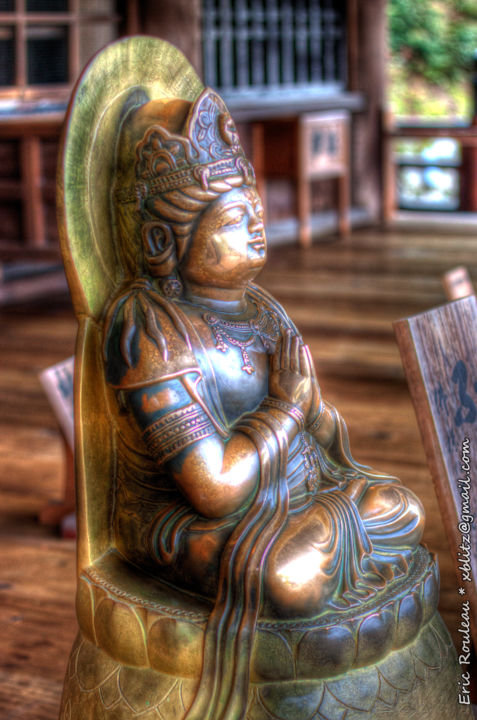 Next there is the famous
platform of Kiyomizu with an even grander view of the city and of the
pagoda surrounded by forest on a distant hill across the valley. On
this platform you can see the statue of a Buddha. There is also a huge
encense pot where you can make an offering and ring the great bell.

If you go past the platform to the right, you will see the
famous little water “fall” called Otowa-no-taki spring
which is more water gushing from a spout with people lining up to drink
from it.

To do so, you have to use the available laddles which are in a
special countainer and bombared by UV light in order to kill the
bacterias of the thousands of people using them every day. When I went
there it was free but i think it’s now 200 Yen to sample the water,
which has healing proprieties.

Despite the fear of disease, the water is actually very nice
and a picture of you drinking from the source is a classic at Kiyomizu
Dera.

If you continue to the right, there are some shops and some
trail you can take around a nice garden bursting with life.

The the left of the platform, there is a smaller shrine
called Jishu-jinja, the ‘Love
Shrine’. Since the samurai period, people come there to pray for love.
There are tow stones separated by 18 meters. If one succeed at walking
between the two stones in a straight line, his wish for love will be
granted.

s in English.) Before you enter the actual temple precincts,
we strongly recommend that you take a few minutes to check out one of
the oddest ‘sights’ that we’ve come across at a Japanese temple:
the Tainai-meguri (admission
¥100; 9am-4pm), the entrance to which can be found just to the left
(north) of the pagoda that is located in front of the main entrance to
the temple (you may have to ask a temple official since there is no
English sign). We don’t want to tell you too much about this hall as it
will take away from the experience. Suffice to say, by entering the
hall, you are figuratively entering the womb of Daizuigu Bosatsu, a
female Bodhisattva who has the power to grant any human wish. Once you
get to the inner sanctum, you are meant to turn the large stone found
there in a clockwise direction and make your wish. Be warned, there are
several 90-degree turns to navigate in the darkness – walk slowly and
keep a hand in front of you.

What to do around the temple

for the time being, Here’s a travelog’s experience
at Kiyomizu-dera.