Interview with Mr. Jason Quinn, abbot of a Zen center in Berkley, California

I got in touch with Mr. Jason Quinn, the abbot of the Empty Gate Zen center in Berkley, California.

The Empty Gate Zen Center is a Buddhist center of teaching and practice, welcoming anyone interested in learning Zen and meditation. It is of a Korean Zen lineage called Kwan Um School of Zen.

Could you please tell us what you do exactly?

Jason Quinn: I’m the abbot of the Empty Gate Zen Center. The main job of an abbot is connecting with the community and responsible for making sure the doors stay open. I also teach meditation here and run some of the morning and evening practice periods.

About your background, how did you get interested in Buddhism, and in Zen?

Jason Quinn: Very simple. I started playing music when I was 13 years old. I thought my whole life that I was this “musician”. It was something that gave me an identity, a 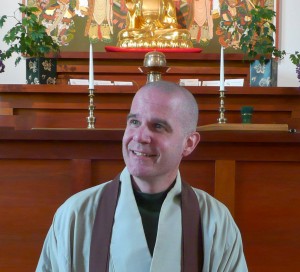 purpose. One day, 12 years later, someone asked me, “what percent of music is “you?” I immediately responded, “90%” “90%?” She said, “then when you are not playing music, what are you?” This question completely hit my mind. I was stuck and could not answer. “She continued, “What is this thing that eats…..goes shopping…. walks…..what is it?” My only response was “I don’t know.” She then said, “maybe you should investigate that.” So I knew I needed to look in and thought meditation would be the tool to do that, though I had no idea what mediation was. One day I found the Dharma Sound Zen Center (now Ocean Light Zen Center) in Seattle. The first thing that was said in the orientation was, “Zen means, ‘what am I?” After I heard that, I knew I was at the right place.

How did you get into running a Zen-do?

Jason Quinn:In Buddhism, we would say, this is my karma. I had no intention or interest in running a center. The only thing I wanted to do was practice. I remember on my second retreat, I was asked to be the kitchen master. I had no idea on how to cook, but I had to learn real fast! Two years later I moved to the head temple, Providence Zen Center, and became the house master. There is where I learned about how a center is operated. After 9 years at the Providence Zen Center, I moved to the Empty Gate Zen Center in Berkeley and was asked to become the abbot.

Are you affiliated with any
temples or organizations?

Who comes to visit you?

Mostly people who are interested in finding their true self, meaning making their lives more clear. Sometimes people come out of curiosity or because they are doing a school project.

What do you offer?

Jason Quinn: We have daily practice 7 days a week and have 1-3 day retreats once a month. There are Dharma talk every Wednesday which include an orientation to beginners. We also have koan interviews every Saturday morning with our guiding teacher Zen Master Bon Soeng. 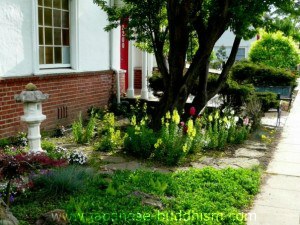 How is it being a Buddhist practitioner in the USA? Are you ordained?

Jason Quinn: When someone needs help…just help them, that is all. Most important is connecting “meditation” to our lives moment to moment. I was ordained as a bhikkhu monk for 9 years and recently returned to lay life keeping the 16 precepts.

How do you see the state of Buddhism in The US today?

In your view, what is the most important thing in Buddhism?

Finding your true self and using it to help this world.

Do you have any advice for people who would like to get involved in
Buddhism like you did?

Jason Quinn:I think best is actually going to a center or place where mediatation is taught. Reading is ok, but no substiute for experince. The Sixth patriarch once said, “A picture of a banana will not cure your hunger.” There are many different styles and flavors of Buddhism out there. There will be always be stuff you like and don’t like about all of them. Finding a style the really connects is important. But most important is seeing what the direction of the practice is. Why practice meditation? What is the purpose? Is it for a good feeling? A certain state of mind? Is it realy to help us to return to our true selves and help others?

Could you tell us about the area you live and how you got there?

Jason Quinn: I live in Berkeley, California at the Empty Gate Zen Center. I moved here in November of 2008 after living at out head temple, Providence Zen Center, for 9 years. There I lived, worked, and practiced as a monk.

I thank Mr. Quinn for his time. If you are in the area, make sure to stop by the center and say hi or better yet, join them for a session of meditation.