Dogen Zenji was the founder of the most famous of the Japanese Zen traditions: Soto. I say that it’s the most famous because famous Zen masters in the West like Shunryu Suzuki and Taisen Deshimaru were both of the Soto Zen lineage. He lived in the 13th century (19 January 1200 – 22 September 1253) and traveled to China to learn Ch’an Buddhism in answer to his dissatisfactions with the Tendai school of Buddhism, to which he belonged in his early life.

Dogen was born in Kyoto from a noble family. His exact parents are unknown but it is thought that Minamoto Michitomo, who served in the imperial court as a high-ranking councilor of state might be his father. He might have been born out of wedlock. His mother died when he was 7. The common belief is that her name was Ishi, daughter of Fujiwara Motofusa, the Fujiwaras being a very powerful family.

Orphan at a very young age, Dogen got his first examples of impermanence and some believe that it is what led him to become a monk. He first joined the Tendai sect, then prevalent in the Kyoto area.

Right away, he was disturbed by a question: “Both the esoteric (Shingon and Tendai) and external doctrines (other prevalent doctrines at the time) of the Buddha teach that enlightenment is inherent in all beings from the outset. If this is so, why do all the Buddhas, past, present, and future, seek enlightenment? “

Not being able to find the answer to that question in the Tendai school he was in, he set to study with Rinzai Zen Master Eisai (1141- 1215) and then his disciple Myozen. They both undertook the trip to China to go where their master had studied, Jing-de-si temple.

Dogen was dissatisfied with the heavy reliance on koans of the Rinzai tradition and finally found a teacher who taught him to sit in silence and meditate. This master was Nyōjo (Rujing), the 13th patriarch of the Ch’an (Soto) Zen lineage in China.

Under this master not only found the answer to the question that was tormenting him but also achieved enlightenment after assiduous zazen sessions.

This marked the most important moment of his life. He received the transmission of the dharma from Nyōjo and thus became a teacher and master in his own right. He was asked to return to Japan to spread Soto Zen.

He returned to Kyoto and started to spread the word and attracted some disciples.

His teaching attracted the ire of some monks at Mt. Hiei as it was in contradiction with what they had been teaching and took some of their influence away. At the time, Tendai was a big, corrupted machine clearly linked to the aristocracy.

For this reason, he had to flee the capital and built Eihei-Ji in Echizen (modern-day Fukui prefecture) at the invitation of Hatano Yoshishige, the Kyoto magistrate. 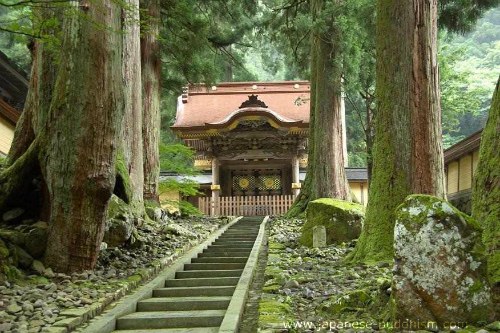 Prolific writer, Dogen wrote many invaluable treatises on zazen, Zen and Buddhism. His work is often seen as masterpieces. He chose to wrote in common Japanese, even if the trend at the time was to write in classical Chinese, in order to reach the largest number of people possible.

Many scholars say that the essence of Japanese culture cannot be correctly understood without considering this great Zen master. Deeply impressed by the depth of Dogen’s thought, many Japanese have gained confidence in their culture.

Thanks also to the people following him, especially Keizan Jokin through Koun Ejo and Tettsu Gikai, the Soto school began making big impact on society. Linking itself with the common people, it spread throughout the entire nation. Many brilliant Zen masters emerged. The teachings of the school flourished especially in the Tokugawa Period and was considered the ultimate refinement for the samurai class. Gesshu, Manzan, and Baiho pressed for revival of tradition in the school.

Now, many temples and Zen dojo are spread around the world, trying to teach Dogen’s method to anyone interested. You can read in more details about such an organization by following this link.