Tiger Woods:
The Richest Of The Buddhist Celebrities

Tiger Woods is a Buddhist. In today’s
world, more and more people proclaim to be Buddhist celebrities. Being
Buddhist in Hollywood has its perks as it is an instant image booster.
Whether it’s Richard Gere being in the Dalai Lama’s intimate circle,
Steven Seagal being the reincarnation of a rinpoche, the followers of
the Buddha enjoy an instant boost in their coolness factor.

At the moment of writing this page, our friendly golf champion is
caught in a major sexual scandal and has yet to convince everyone of
his good faith. 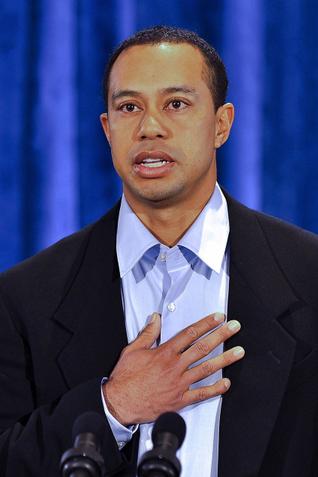 During his famous press conference on February 19, 2010, Woods said
that he was working on improving himself in order to rid himself of
sexual addiction. He said:”Part of following this path for me is
Buddhism, which my mother taught me at a young age. People probably
don’t realize it, but I was raised a Buddhist, and I actively practiced
my faith from childhood until I drifted away from it in recent years.
Buddhism teaches that a creation of things outside ourselves causes an
unhappy and pointless search for security. It teaches me to stop
following every impulse and to learn restraint. Obviously, I lost track
of what I was taught. “

His declaration attracted a nourrished fire from the right wing
organizations in the U.S. The network Fox News decided that it disliked
the golfer and attacked him on the fact that he wasn’t Christian. Some
commentator said that he should turn to Jesus for salvation.

Some blogs also started ridiculing him with titles like:" Why is Buddhist Tiger Woods taking the name of Christian Gods in vain?" (SIC) A comment on how he used words like Jesus-Christ and God during a game. I guess they didn't jnow that Christianity is a monotheist religion.

It is not my place to judge whether he is a good man or not. Value of a person is like the rest of our world, impermanent.

All I know is that he is a good golfer and I hope that he will soon be able to concentrate on what he excels in: golf.