Roberto Baggio:
the best kicker among the Buddhist celebrities

In today’s world, more and more people proclaim to be Buddhist
celebrities. Being Buddhist in Hollywood has its perks as it is an
instant image booster. Whether it’s Richard Gere being in the Dalai
Lama’s intimate circle, Steven Seagal being the reincarnation of a
rinpoche, or Roberto Baggio, the followers of the Buddha enjoy an
instant boost in their coolness factor.

Roberto Baggio (born 18 February 1967 in Caldogno,
Veneto) is a retired Italian footballer. He was among the most
technically gifted and popular players in the world throughout the 1990s
and early 2000s. He played for the Italian national team in three World
Cups, and is the only Italian player ever to score in three World Cups.
He was the best Italian player of the 1994 FIFA World Cup, carrying his
team to the final, but was one of the three players who missed a
penalty in the final which contributed to Italy losing the trophy to
Brazil on penalties. He won both the European Footballer of the Year
(Ballon d’Or) 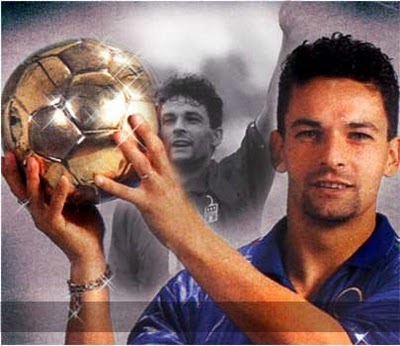 and the FIFA World Player of the Year award in 1993. 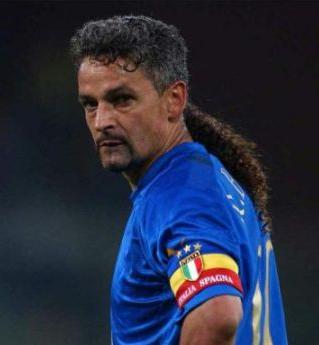 He was a second striker of technical brilliance. His close control, vision, passing and finishing were among the best in the world during his prime. Baggio is known as Il Divin Codino (The Divine Ponytail), for the hairstyle he wore for most of his career and his Buddhist background.

He converted in the late eighties, when a knee injury made him miss many games and threatened his career. He says that his faith helped him go through this trying time.

If you'd like to learn more about his form of Buddhism, I recommend this book:

He recites Nam Myoho Renge Kyo every day as part of his practice.

You can watch him here visit a temple in Laos

If you are a fan of Roberto Baggio, or of soccer, you have to see this compilation of his carreer. It's seven minutes long but it's worth it.