Anytime it comes to a Buddhism symbol, the Dharma wheel is one of the most common symbols. The wheel of Dharma is usually the image used to identify the Buddhist religion. It’s basically a chariot wheel with 8

spokes. It can be of any colors, depending on the school or the culture it comes from but in general the wheel of Dharma’s color is gold. It is one of the eight auspicious symbols of Buddhism. 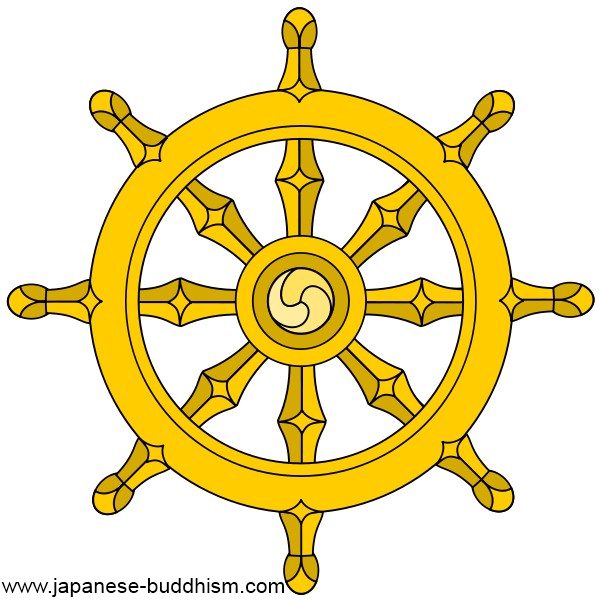 The history of the Dharma wheel is unclear but it is know that it’s one of the oldest symbol and it was used at the time of the Indian king Ashoka ( 304 BC – 232 BC). The symbol has spread, with Buddhism in all the countries adopting Buddhism. It can be seen in art, iconography, statues and other Buddhism related articles.

It’s also present in different forms (usually with more than 8 spokes) in flags like the flag of Mongolia and Thailand’s flag.

What is the symbolism involved in this wheel? Let’s play the role of Robert Langdon and examine the hidden meanings.

First, the round shape is a symbol of perfection. It is flawless and has no sharp edges. It revolves in the universe and can be turned. At the beginning the wheel had a perfect round shape and was sometime studded , to represent sturdiness. It now common to see the wheel in the shape represented above. It looks like the wheel found on a ship, representing prosperity according to some. It could also be said that the eightfold noble path radiates outside of the sphere, like the heat of the sun radiates out of the sun-disk.

The rim of the wheel represents meditative concentration or mindfulness which is required to hold every other teachings together.

Each spoke of the wheel represents one aspect of the Eightfold Noble Path.

The middle of the wheel represents moral discipline. It often has three swirling elements, similar to the yin-yang symbol or the tomoe in Japan. 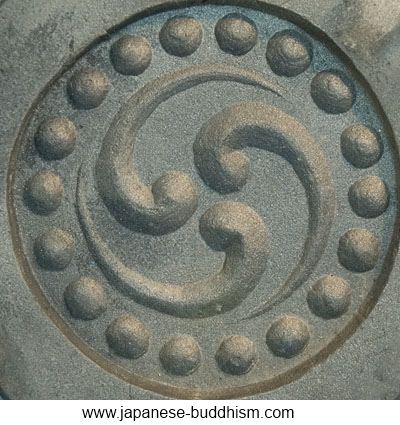 The meaning is different though and it is said to represent three important aspects: the Buddha, the Dharma and the Shanga (community) which are at the core of Buddhism.